Montepagano is located on the top of a hill overlooking the sea side resort Roseto degli Abruzzi. Its origins date back to the Middle Ages when, for fear of the Turks, the inhabitants of the surrounding villages took refuge on the heights and built new settlements.

Worth visiting is “il Castello – “the Castle”, perched on the hill of Roseto from which you can see a breathtaking view of the sea, La Porta da Borea – one of the most important remains of the imposing medieval walls and the church “Santissima Annunziata” dating back to 1602. The symbol of Montepagano is the monument of the “Campanile” – bell tower, that rises for 40 m on the main square.

The most known manifestation of Montepagano is without any doubt the Wine Exhibition, taking place during the first week of August. The crown jewel of Roseto degli Abruzzi is the basketball tournament ” Trofeo Lido delle Rose” – started in 1945, holds the title of the oldest summer tournament in Europe and perhaps in the World. In the village are also held other sporting events such as skating, international stopovers of beach volleyball and fishing championships.

The town was famous and powerful in antiquity and is today one of the most important historical, cultural and artistic centers in Abruzzo. The surrounding landscape is also impressive for the canyon-like “calanchi” , geological formations caused by the erosion of clayey soil and the partly-unexplored caves. The Nature Reserve is a protected area, characterized by various environment, that captures the visitor’s gaze. Past deforestation and pastures has brought to the surface clay soils, which, eroded by the alternation of periods of rain and drought, produce these particular  forma­tions.

The most important monuments in Atri include the 13th century Duomo – the Cathederal of Santa Maria Assunta, which was built on the remains of an earlier Romanesque church, and the Palazzo Ducale, the palace of the Acquaviva’s which is built on the highest point of land in the city. Also visit the Baroque style Church of St Reparata (the patron saint of the city), designed by Giovanni Battista Gianni in 1741. On the front of the church there is a 14th century statue of the saint while inside is a wooden canopy, the work of local artist Carlo Riccioni, who made it between 1677 and 1690.

In Atri centre you can see the Palazzo dei Duchi D’Acquaviva, built in the 14th century on the site of a Roman cistern, then fully renovated in the 16th century. Among other important buildings is the Municipal Theater, a building known for its excellent acoustic qualities and reminiscent on the outside of “La Scala” in Milan and on the inside of the “Teatro San Carlo” in Naples. Among the most interesting museums in Atri is the Capitular Museum divided into several sections, with an area devoted to painting and including many substantial works

PINETO AND THE MARINE PROTECTED AREA 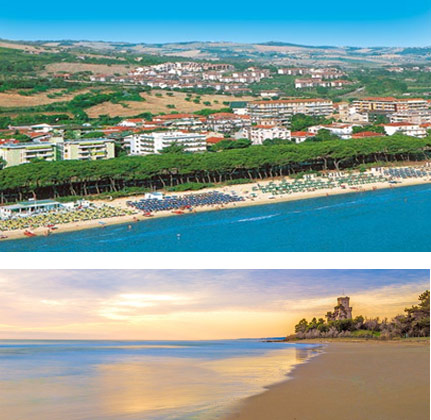 Pineto is defined a piece of paradise. It is a small seaside town in the region of Abruzzo. Its name derives from the characteristic pine trees along the coastline. The pine grove is more than 4 km long.

The history of Pineto began in 1920 thanks to the Filiani Family from Atri. The Filiani family owned a residence in the centre of Pineto and at that time the town was depopulated. The name of the residence is “Villa Filiani” and it could still be seen in the centre of the town. The Initiative to develop Pineto as a seaside resort was of the Filiani Family. They have decided to design a pine grove across the coastline and this has rendered the town of Pineto one of its kind.

Part of the territory of Pineto is the Tower of Cerrano. Is was a watch tower built in order to protect the territory from the invasions of pirates and was a part of an ancient roman harbor playing a significant role in the Mediterranean trade of the whole Abruzzo region. The port was destroyed by the republic of Venice, but the tower remained and now is hosting a headquarter of a marine biology center.

The beach surrounding the Tower is a Marine Protected Area that includes seven kilometers of coast and completes a program of environmental protection and enhancement consisting of the already existing network of underwater nature sanctuaries that have allowed, in these years, the safeguard, the repopulation, and the study of the marine ecosystem. The sea bed consisting of sand and rocks is determined by the semi-submerged boulders of the ancient Roman port. 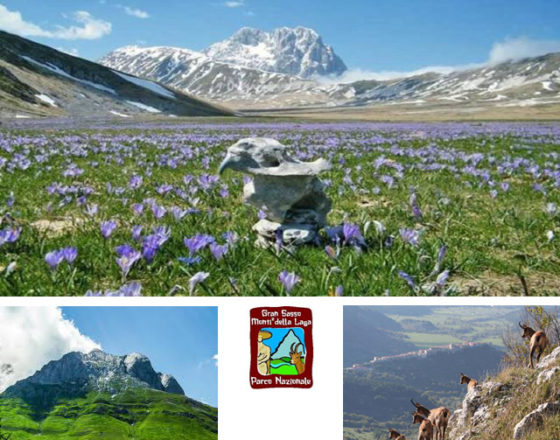 Gran Sasso e Monti della Laga National Park is situated in the heart of the Apennines and it is spread out across the province of Teramo, L’Aquila, Pescara, Rieti and Ascoli Piceno. It is one of the largest parks in Italy. It offers a number of proposals, itineraries and visits for every season thanks to the richness of its habitats, its massifs, and thanks to the charming historical-architectonical evidences it preserves. The Park is also characterized by the presence of the highest peak of the Apennines, Corno Grande (2,912 meters). On this chain there is the one and only glacier of the Apennines, the so-called Calderone, which is also the southernmost glacier in Europe.

The park is one of the largest protected areas in Europe, and is centered around the massif of the Gran Sasso, which dominates the surrounding landscape; it rises vertically on the immense pastures of the Campo Imperatore, defined as the “small Tibet” for its characteristic shape of houses perched on the slopes of the mountain. On the north side there is the profile of Monti della Laga chain, where thousands of migratory birds stop on the shores of Lake Campotosto. This area is completely covered by woods of beeches, firs, turkey oaks and chestnuts.

The park contains one of the most biologically diverse areas of Europe. The climate is between that of the Mediterranean and that of the rest of continental Europe. The park contains more than two thousand plant species. The symbol of the park is Apennine chamois. Many species of wildlife inhabit the park, including rare animals such as the Golden Eagle, the Peregrine Falcon and the Eagle Owl as well as the Apennine wolf, Marsican brown bear, roe deer, wildcats, wild boars, foxes and squirrels.

In this area worth visiting are the many well-preserved villages with churches, abbeys and castles, caves, necropolis and temples that are full of mystery and charm. 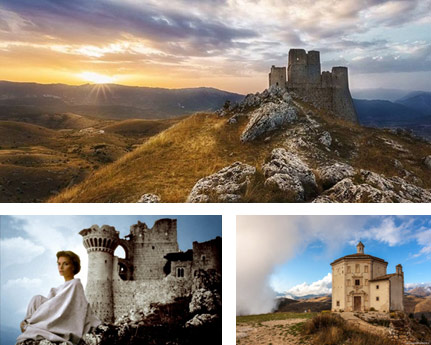 Rocca Calascio is one of the most suggestive castles of Abruzzo and is situated 1460 m above the sea level in the heart of the Gran Sasso National Park and Monti della Laga. It was build by King Ruggero of Altavilla to spot and neutralize the invasion of enemies. It was built entirely with white stone and was renovated between 1986 e 1989.
Shortly before the restoration the castle became famous all over the world thanks to the film Ladyhawke by Richard Donner (1985), with Rutger Hauer, Michelle Pfeiffer and Matthew Broderick, but the castle of Rocca Calascio was set of many other films, including The name of the rose (1986), The journey of the bride (1997) and more recently The American (2010) with George Clooney.

The castle can be visited free of charge. We also suggest you to go south-west of the Rocca, where the village is located and from where the access to the castle was only possible through a drawbridge. Very beautiful is also the church of Santa Maria della Pietà, a temple built in 1596 to celebrate the local population who managed to defeat a band of robbers.

You can immerse in nature, history, beauty and also in a number of references of pop culture that do not spoil, for a trip out of town that you will remember for a long time.